Had a great day yesterday riding along the edge of the Sierra’s. Was not able to upload my photos last night but it worked this am. The roads have been very twisty

which has been fun, but keep distances you travel down.

We had a great hotel in Sahuaripa, so we took our time getting ready to ride. Hey Hey we are in Mexico!!

Sam used his Steripen to clean some water. “do not drink the water” has always been the saying. 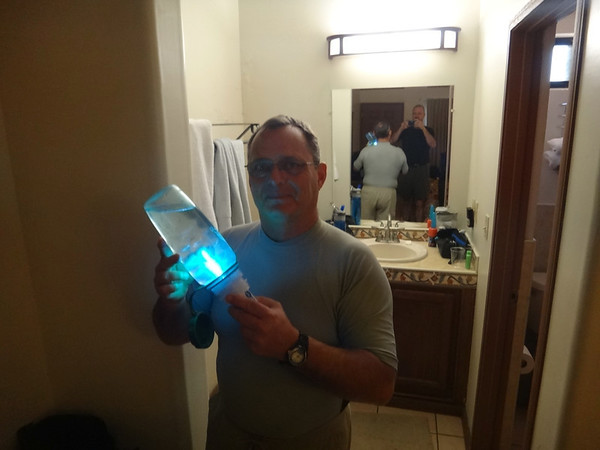 Bikes Parked safely under the structure outside our rooms in front of the restaurante.

Sam was finishing up a post and some other internet stuff, while I took a short walk to the Tienda (store) to get some bottle water. No Starbucks here. Just Instant coffee of the shelves. The town is neat and tidy on the streets as we this morning there were people out sweeping up at all the shops and businesses.

side street but the further from Centro, you had dirt roads, and not as clean. The people have been very friendly and warm, as we try to communicate on our very limited Spanish. We learning but wish I was fluent to be able to ask more life questions.

Big statue just past our Hotel. Not sure who he is, but will be able to research this later,

We had breakfast, but Sam is not a fan of Instant Coffee.

Chorizo and Huervos for Breakfast

Sam had something else. Not the hot peppers. He said his was spicy. Sam riding out of the courtyard, then up the narrow path back to a parking lot behind Pemex Most every town has a large sign and greeting. This is the road we are on. Sam riding past our first pair of Donkeys. We know that we have to be careful of livestock on the roads…

We road along the mountains all morning. Great views.

Stopping to enjoy the views and take in the fresh air!

We were on this secondary road, and the conditions changed a great deal. Some places it was really good roads.

others the road had good sized pot holes or just gravel. Just had to stay alert for the changes. Along this road the GPS was not real helpful, and neither were the maps that did not show the towns. But we made it asking some locals to confirm we were headed the right way. They were always very warm and friendly.

saw one 6-7 foot snake cross the road in front of me but was too slow with my camera. Just part of the day on the road.

We had about a 60 mile ride down to a larger road Hwy 16 that would take us east through the mountains.

Had our first big Military checkpoint. No Photos. They were all young guys and they did not speak any English, so we had a lot of questions, where we answers “no entiendo” poco Espanol for these gingo’s, then they lightly checked our bags and sent us on our way.

Great pavement and having fun on the twisty road!

Amazing mountains all around…. pictures just do not capture the space at all.

Stopped for fuel in Yecora. When we reached Basaseachic and decided to stay here so we did not get caught in the middle of nonwhere in the dark as Creel was still a couple hours away. We were both tired as it had been a good hard day of riding. and we ar enot riding at night as there are many hazard like this one we saw earlier (it happens to be marked but many are not)

The hotel is and it is in Basaseachic (edge of a national park). This is a working town for the mines, so the hotel as not quiet as nice as last night but we paid $40 for it. We will get better at looking for hotels as we go.

They had a large cattle grate that you had to ride over to get to the hotle and secure parking right below our room. I had to do my 600 mile oil change service, so I needed to get a bucket to drain the oil into. Found a small auto parts store but they did not have anything. But a nice young guy Caesar came over and helped me out (he grew up in Phoenix but moved back here a year ago with his family). Found a bucket and took it home and cut it down to fit under the bike. Thanks Caezar!! The hotel had a restaurant. We had a nice dinner for $3.85 + beverages

End of day two in Mexico. We are both really looking forward to our ride into Copper Canyon today!